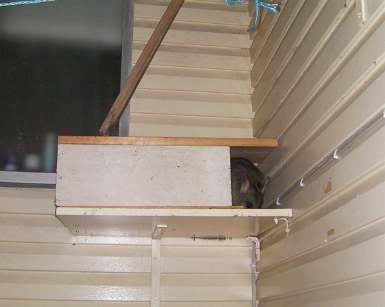 You know, sometimes in this busy life we create for ourselves we forget that the only thing we have in this world is each other. Especially when someone cuts in front of you on the freeway while they are holding up a mobile phone to their left ear.

And then there are the special moments when you meet someone, engage in conversation, and realized that all you have to do is shutup and listen, because they are so interesting and enthusiastic that all your cares disappear for thirty to sixty minutes.

This happened to me recently when I met a “bush poet”, former cowboy, environmental warrior and animal lover who captivated my attention for quite a while in the showroom at Arborlab Tree Care Products.

And for those who know me, keeping me quiet for any length of time is a major accomplishment.

First of all, for the purpose of anonymity we will call this gentle-man (in the true sense of the word) YowieMark. (or YM for ease of typing) oh! don’t worry I’ll give him away later whenI link to a poem he performs at the Maleny Music Festival. (it’s hilarious with more twists than a cut snake) Oh! that reminds me, I want to curate a list of the best Aussie expressions ever heard. The best one for me is “I’ve got to rattle my dags.” Which means get up and get moving. If you’ve ever heard an unshorn sheep get startled, you’ll know what it means.

Possum Boxes and other Insights

I have included, with YowieMark’s permission most of a follow up email to his visit that he sent. I have put some of his photos in the reply rather than as attachments.

Hi Nita,( I had to include the good comments)

Thank you so much for your assistance today, very much appreciated, and always good to check out the product live and even “test-saw” to get a good idea of which Silky works best. I will certainly be back again in the future to grab one of the rigid units to complement my folding saws – and the little survival knife looks neat too! I look forward to testing the medium blade for the Silky Big Boy on some of the dryer harder stuff in the next couple of weeks. (and the gauntlets feel awesome too!)

I thought I’d confirm with a couple of photos on the “possum box” idea for anyone who has trouble with the little furry fellas. I can’t remember where I saw the article originally, may have been the museum site or one of the wildlife websites, but I know I read somewhere that by installing a “possum box” this will establish a home for one female possum, who will then become territorial and chase other possums away, thus ensuring you will only ever have 1 (or 2 when she has a joey) possums in residence around your house.  When her joey gets to a certain size, she will chase it out. They seem to kick the male joeys out earlier than female ones. 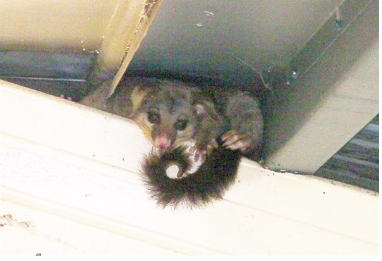 When Kath & I first moved in to our Woodford home, there were at least a dozen possums that constantly romped, bomped, banged and clanged all over our roof – we did have a lot of date palm trees close to the house then too, so these all used to be full of possums and bats. Nice to have wildlife around, but there are limits, especially when you like to have a bit of sleep!

Since I put in the possum box, I have only ever had the one possum, plus a new joey each year. I encouraged them to live in the box by leaving some fruit, usually grapes or bananas or bits of apple, in the box. Once they got used to me, they would take food from my hand.  Old mum possum disappeared after 8 years (possibly to go off and pass away somewhere), but the box was reoccupied by another possum within a week or so. A couple of possums had a competition as to who would take over and after a short feisty snarling match, our current possum won. She has now had two joeys. 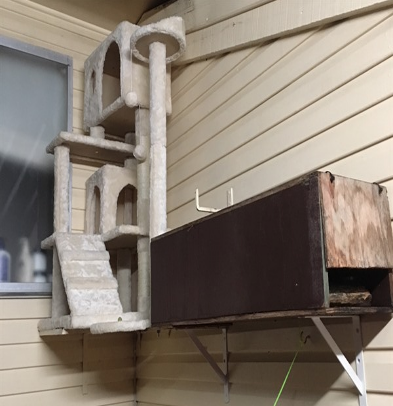 A possum box can be either constructed from wood or can even be just a bit of hollow timber (bit of an old branch or trunk) that can be built in, or against, or suspended from, a building or a tree in close proximity to the building. In my case, I have it on a shelf actually against our house wall – this was only because a possum used to stay in the little alcove between our old downstairs laundry roof and the newer patio roof that extends out above it (see the photos). I wanted to move them out of there, so now it is just used as a highway to get to the residential box. Originally, I just put a board from the alcove to the box for the possum to traverse, but then I got an interesting inspiration from an ebay advertisement. Or, if you listen to my wife Kath or my old mate Brenden, I went stark raving mad! There is now a cat play tower where the original box was, which the possums use to climb down to what is now the old box, or sometimes even sleep somewhere in the cat tower! I was accused of becoming a tree-hugging greenie hippie and going soft on a creature that, ten years prior, I would have shot and eaten! Perhaps I am just mellowing in my old age, but it is nice to share a residence with Australian wildlife.

We have a lot of birds, even a cheeky scrub turkey, and the occasional kangaroo and long-nosed bandicoot. The only thing Kath particularly objected to was the 3-metre carpet snake that lived for a while in our garage/shed. I called her Julie, she was quite docile and didn’t mind being handled, but that did nothing to endear her to Kath!

Anyway, I am prattling on a bit – sorry for the long-winded email – I have put a link to a recording on youtube of myself and my good friend Ian performing a poetic duet at the Maleny Music Festival hope you enjoy:

I bet you enjoyed this, I did. And I enjoyed the opportunity to share it with you. All comments are welcome. Send them by email if you wish to silkysaws@hotmail.com Title them Hair of The Dog and I will know immediately that you are chuckling and thinking about a chihuahua. So if you haven’t listened to the poem, you won’t know what I am talking about.